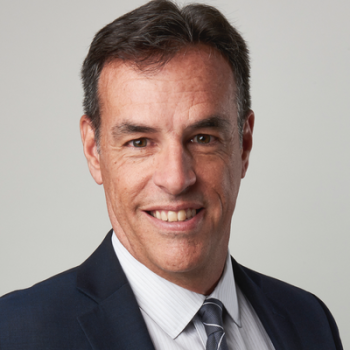 Andrew Sherry, who joined Knight Foundation in Jan. 2012, is both a former foreign correspondent and online publisher with extensive start-up experience. He is responsible for the foundation’s strategic communications and marketing functions, including online strategy, press outreach and government relations.

He came to Knight from the Center for American Progress, where he developed the online communications infrastructure. Previously, he was at USA Today, where he launched their profitable online travel vertical then managed online news coverage for the 2004 elections.

He caught the entrepreneurial bug in Asia, where he helped launch a company that deployed broadband Internet and web portals to hotels in 14 cities and nine countries, and was approved for listing on Hong Kong’s second board.

As a journalist, Sherry was based in Hong Kong, Hanoi, Phnom Penh, Nicosia, and Paris, first for AFP news agency then Dow Jones, where he became regional editor of the Far Eastern Economic Review. Memorable assignments included covering the opening of Vietnam and the fall of Indonesia’s Suharto, and editing the 1996 “scoop of the decade,” the jungle show trial of genocidal Cambodian dictator Pol Pot who had not been seen by outsiders for 18 years.

Sherry serves on the board of the Communications Network. He is a graduate of Haverford College, and a native of Washington, D.C.