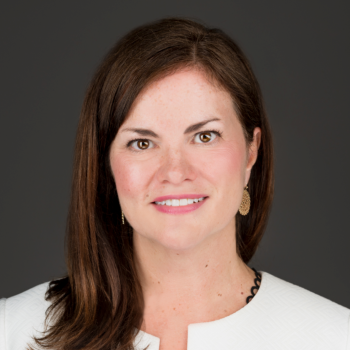 Christine Amer Mayer was elected to Knight Foundation’s board of trustees in September 2016. She serves on the Governance and Program Committees.

Mayer was named president of GAR Foundation in Akron, Ohio in 2012. An Akron native, she practiced commercial litigation and business law for eight years with Buckingham, Doolittle & Burroughs before joining GAR in 2001 as a program officer.

Mayer is the immediate past Chair of United Way of Summit County, where she remains involved in its transformation to a community impact model. She is heavily involved in economic development work, sitting on the steering committee of the Elevate Greater Akron effort, on the board of the Greater Akron Chamber, on the Akron Growth Council, on the ConxusNEO board and on the executive committee of the Fund for Our Economic Future. In recent years, she has focused considerable efforts on Summit County’s arts and cultural assets, helping to lead the Summit County Arts and Culture Assessment. That countywide study led to the creation of ArtsNow, a sector-strengthening initiative for which she served as a board officer for the past six years.

Mayer earned a bachelor’s degree in English from Duke University and a law degree from The Ohio State University.