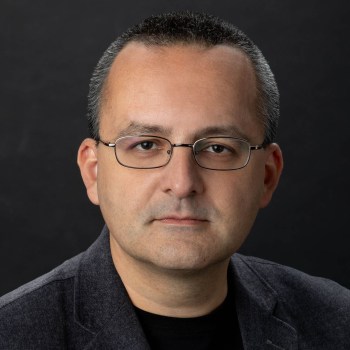 Alberto Cairo specializes in data visualization and infographics. Besides being Knight Chair, he’s also the director of Visualization at the University of Miami Institute for Data Science and Computing, and a consultant for U.S. technology and communications companies and governmental entities in Europe. In the past decade, he has taught in more than 30 countries.

Cairo is the author of the books, “How Charts Lie: Getting Smarted About Visual Information” (2019), “The Truthful Art: Data, Charts and Maps for Communication” (2016), and “The Functional Art: an Introduction to Information Graphics and Visualization” (2013).

In 2012, Cairo created the first journalism Massive Open Online Course ever produced in the world, in collaboration with the Knight Center at the University of Texas. This course, titled “Introduction to Infographics and Data Visualization,” has been offered five times, in English, Spanish and Portuguese – Cairo is trilingual – and has attracted thousands of people from more than 100 countries. Cairo led the creation of the first Digital Humanities + Data Journalism Symposium in 2016, an event that brings together professionals from both disciplines to discuss common challenges. Cairo has also been director of infographics at El Mundo Online in Spain and Editora Globo in Brazil. His teams won numerous Society for News Design and Malofiej infographics awards between 2000 and 2010.