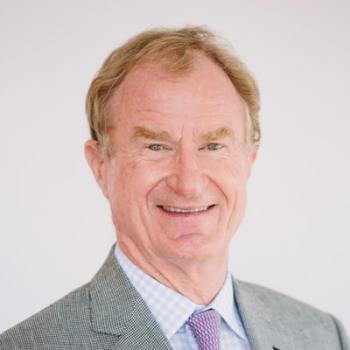 E. Roe Stamps IV was elected as a Knight Foundation trustee in June 2006. He chairs the Investment Committee.

Since moving to South Florida in 1993, Stamps and his wife, Penny, have devoted significant time and resources to philanthropic causes in the community. They are longtime supporters of the University of Miami, the Grayvik Animal Care Center, Fairchild Tropical Garden, the Make-A-Wish Foundation of Southern Florida, Miami Lighthouse for the Blind, Community Partnership for the Homeless, Ransom Everglades School, Breakthrough Miami, the University of Miami and a number of other organizations.

Through the Stamps Family Charitable Foundation, they have shown their deep commitment to education, supporting projects and scholarships at 41 universities nationwide. With its Stamps Scholars initiative, the family foundation has created innovative scholarship programs currently supporting approximately 931 students.

Stamps is a trustee emeritus of the Georgia Tech Foundation, where he served for more than 16 years, and a trustee at the University of Miami and several other organizations.

In 2010, he was honored by the American Red Cross South Florida Region as the Humanitarian of the Year.

At Georgia Tech, he received the Distinguished Alumnus Award from the School of Industrial and Systems Engineering and the Joseph Mayo Pettit Alumni Distinguished Service Award, the highest award conferred by the Georgia Tech Alumni Association. He was inducted into Georgia Tech’s Engineering Hall of Fame in 2001 and received an honorary Doctor of Philosophy in 2014.