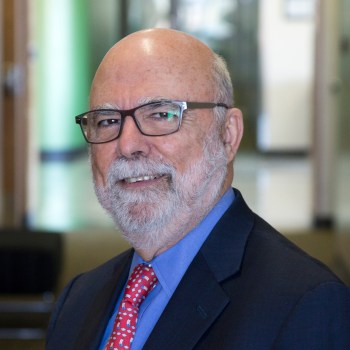 Rosental Calmon Alves is the first holder of the Knight Chair in Journalism title. A pioneer of online journalism in his native Brazil, Alves had a 27-year career as a journalist and educator before moving to the United States in 1996, where he began his role as Knight Chair at the University of Texas at Austin. He is also founding director of the Knight Center for Journalism in the Americas, an outreach program that helps thousands of journalists around the world with online training.

Between 2012 and 2017, the Knight Center’s innovative massive open online courses reached more than 125,000 people in 171 countries. In Rio de Janeiro, Alves became a journalist at 16 and a journalism professor at 21. After more than a decade as a foreign correspondent in Europe, North America and South America, Alves returned to Rio to become an editor, then executive editor and director of Jornal do Brasil, then a leading national newspaper. Calmon launched the first Brazilian online news service specializing in financial news, and Jornal do Brasil Online, the first Brazilian newspaper on the web and a pioneer in Latin America. Since 1997, he has taught classes in online journalism, international reporting, press freedom in Latin America and entrepreneurial journalism at UT Austin.