The Esserman-Knight Journalism Awards, now in its fourth consecutive year, recognizes outstanding investigative and public service reporting in South Florida. The awards include a $10,000 first prize, a $5,000 second prize, and honorable mention awards at $1,000. Nominations are now open.

Nominees are journalists who served the public by holding the powerful to account, shined a light on a pervasive or underreported community problem, or broke new ground on an issue. The work will be judged by the quality of analysis and storytelling, rigor of news gathering, inclusion of community voices, and the impact on public understanding or action.

The nomination period is now closed.

About the Esserman-Knight Journalism Awards

The Esserman-Knight Journalism Awards seek to celebrate and encourage outstanding investigative and public service reporting in South Florida and to foster a community that cares deeply about local news.

Finding themselves in a moment when the local news model is in peril and the free press often under attack, the Esserman family joined with the John S. and James L. Knight Foundation to support local journalism that holds the powerful accountable and tells stories that make a difference. “We encourage others to join us and the Knight Foundation in this endeavor to sustain a free press by supporting local journalism,” said Charlene Esserman.

Entries should serve the public by holding the powerful to account, shining a light on a pervasive or underreported community problem, or breaking new ground on an issue. The work will be judged by the quality of analysis and storytelling, rigor of newsgathering, inclusion of community voices, and the impact on public understanding or action.

The awards are by nomination only. Anyone in South Florida can nominate an article or series of related articles (up to three) on a single topic for the honor. The awards include a $10,000 first prize, a $5,000 second prize, and honorable mentions at $1,000. Winners will be notified in April with an awards ceremony and public announcement to follow.

The Esserman-Knight Journalism Awards has recognized some of South Florida’s most impactful investigative stories and has become an honored tradition in the local journalism scene. For a full list of past winners and honorees, please visit: 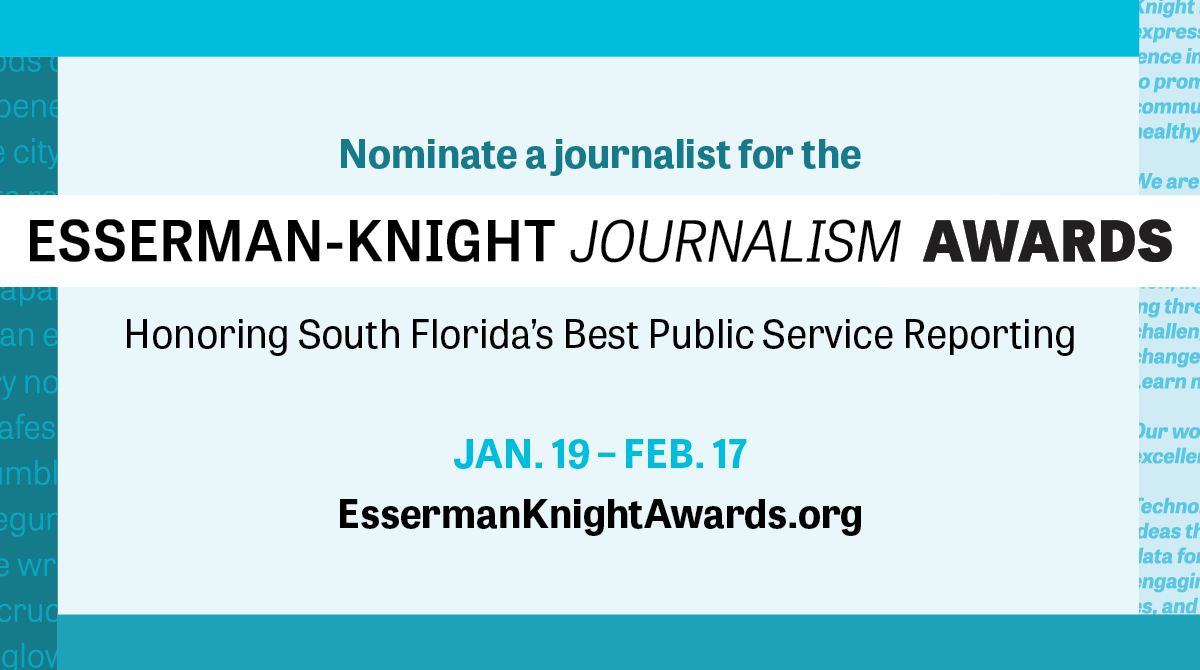 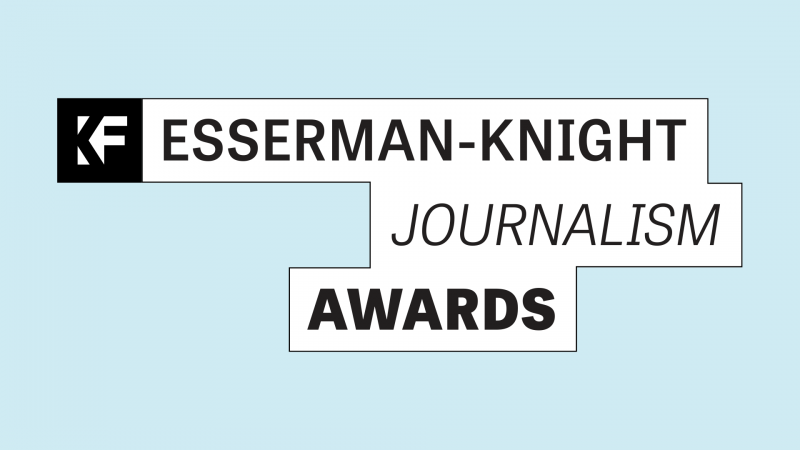 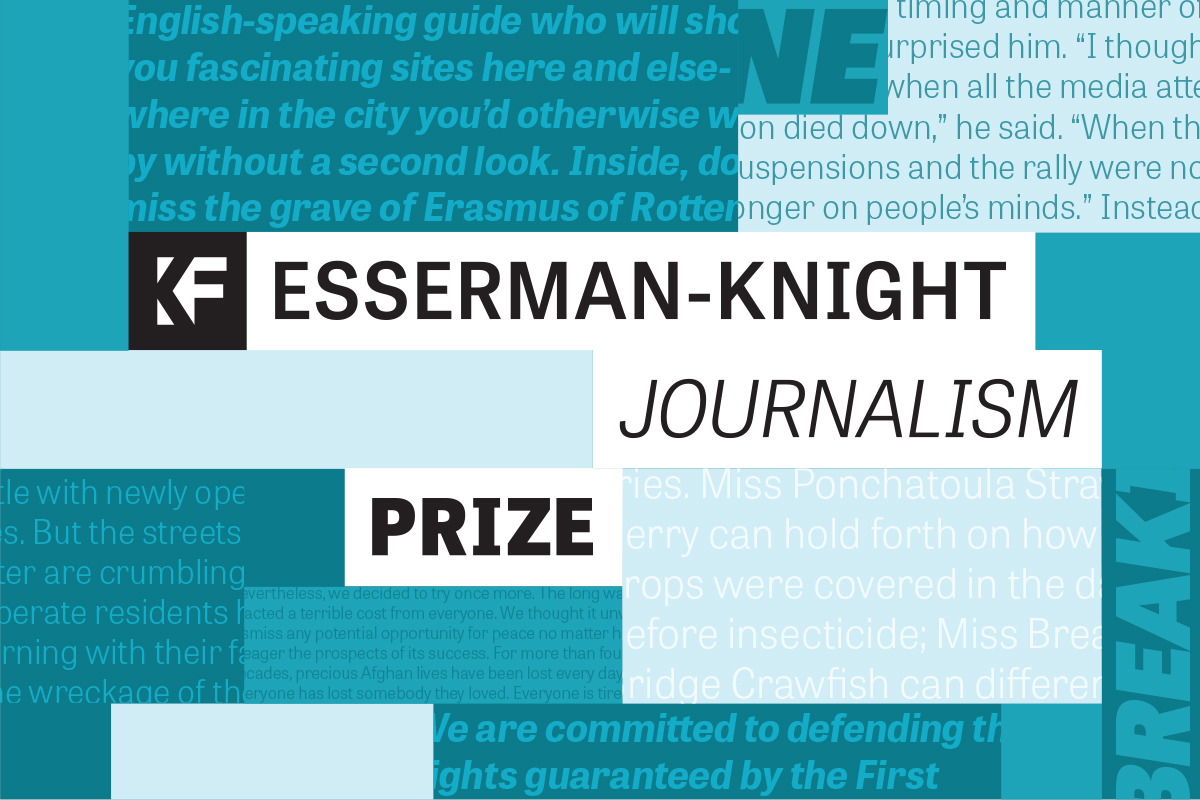 How are the winners selected?
The Esserman-Knight Journalism Awards are by nomination only. Anyone – newsroom colleagues, a member of the public or someone impacted – can nominate an article or a series of related articles (up to three) by a journalist or team. Self nominations, however, are not accepted.

Nominations will be accepted via a simplified application from January 1st, 9:00 a.m. through January 31st, 11:59 p.m. EST through this online nomination form. The nomination form is easy to fill out. Nominators need only provide a link to the story or stories being submitted along with a brief explanation.

All journalists and journalism teams nominated will be contacted and asked to provide more information about their work. A jury of professional journalists and community leaders will then select the winners.

Who can be nominated?
A journalist or team of journalists can be nominated for a story or series of related stories (up to three) published or broadcast in 2022 that include original investigative or public service reporting from Miami-Dade, Broward, or Monroe counties.

After I make a nomination, may I edit my submission?
Yes. You may edit your nomination with any updates, changes, or basic corrections throughout the nomination phase. Once the review phase begins, applications will be closed for editing. Please make any changes as soon as possible.

Do the nominees have to be U.S. citizens?
No. These awards are open to journalists of all nationalities.

How many journalists can be included in an entry?
No more than four individuals may be credited on a nomination. Nominations that have more than four people will submit their entry as “Staff.”

Are these awards for a single story? Can nominations showcase a series or continuing coverage of a topic or event?
Each entry must focus on a single story. An entry may be a single piece, several pieces from a series (up to three), or an original piece and its follow-up developments. Each piece must be produced by the same journalist or group of journalists.

What questions are on the nomination form?
Nominations must include a link to a story or the stories, the name(s) of the journalist(s), and an up to 250-word description on why the nominator put forward this entry for the award.

What journalism mediums are eligible for this prize?
Print, online, television, radio, video, audio and data visualization work—either standalone or in combination—are eligible. Podcasts are eligible, though only three episodes can be submitted. Any documentaries must be under 60 minutes in length.

What are the selection criteria you are using?
Projects will be evaluated on the quality of analysis and storytelling, rigor of newsgathering, inclusion of community voices, and impact on policy understanding or action.

Who decides who wins?
A jury of professional journalists, community leaders and Esserman family members will select the winners.

When will I know if I’m selected as a winner?
Winners and runners-up will be notified in April, with an awards ceremony and public announcement to follow.

Who are the funders of these awards?
The Esserman-Knight Journalism Awards are supported by the Esserman Family Fund for Investigative Journalism at The Miami Foundation and the John S. and James L. Knight Foundation.

The Esserman family encourages others to join them and the Knight Foundation in this endeavor to sustain a free press by supporting local journalism.

Who are Ron and Charlene Esserman?
After the couple moved to Miami from Chicago in 1968, Ron Esserman built a network of businesses in South Florida in the automotive industry. Heralded for his focus on quality and integrity, Ron brought humanism to his workplace and invested in the advancement and well-being of his employees. Ron and Charlene also supported many local causes, establishing community organizations that contributed to the cultural health and well-being of South Florida. They helped establish Zoo Miami and the Deering Estate Foundation, and shaped the Miami City Ballet, the Florida Grand Opera and the Arsht Center. Throughout their lives, they were engaged in the political process and supported candidates and causes that focused on guaranteeing free speech, equality for all, quality education and access to resources to enable everyone to build a better life. The Esserman family is investing in strengthening local journalism in South Florida through the Esserman Family Fund for Investigative Journalism, which supports this prize and an annual, year-long investigative reporting fellowship at a local outlet.

Learn more about the impact of Ron Esserman, who passed away in 2020.

What does The Knight Foundation do?
Knight Foundation is a national foundation with strong local roots. It invests in journalism, in the arts, and in the success of cities where brothers John S. and James L. Knight once published newspapers. Its goal is to foster informed and engaged communities, which it believes is essential for a healthy democracy.

How can I support local journalism?
“We encourage others to join us and the Knight Foundation in this endeavor to sustain a free press by supporting local journalism.” – Charlene Esserman

You can subscribe or donate to your local news outlets, and you can make a gift to the Esserman Family Fund for Investigative Journalism at the Miami Foundation, clicking this link.

Who won last year?
To read about prize-winning journalists and stories from previous years, visit miamifoundation.org/essermanjournalism