In the final days of a historic and consequential presidential election, the nation is facing an avalanche of falsehoods spread online and broadcast on cable and streaming television news. Recent polling from Gallup and Knight Foundation found that 8 in 10 Americans share concerns that misinformation will sway the outcome of the election. While Americans agree there’s plenty of blame to go around, more than half say President Trump (58%) and social media (54%) are largely responsible.

To help stem the spread of misinformation and disinformation, Knight Foundation has invested in better equipping journalists with the tools and training they need to quash it and in scholars and researchers at top universities and think tanks to better understand the problem.

Falsehoods around the election are spreading like wildfire. For example, of the 13.4 million mentions of voting by mail on social media; television news, print and online news; blogs and other online forums between January and September, nearly a fourth — or 3.1 million mentions — have most likely contained misinformation, according to The New York Times. Under pressure from their users, advertisers and, more and more, policymakers, internet technology companies are increasingly taking steps to limit the spread of misinformation and dangerous conspiracy theories  on their platforms — particularly about COVID-19 and the upcoming election.

Mis- and disinformation are not new. But the internet and digital platforms have shortened the distance they have to travel and opened the possibility for amplification at a global scale — with dangerous ramifications for democracies around the world. These ramifications are playing out in real time and with relatively limited data or knowledge to support meaningful solutions.

Complex challenges like this require sustained investment. Knight has awarded $50 million in grants to foster the growth of an emergent field of study and to catalyze new research on the ways that networked technologies, such as social media, are impacting our democracy. Since last year, we have invested in more than $3 million to train, prepare and provide tools for journalists to combat misinformation during Election 2020.

First, these phenomena are not well understood, and much of the public dialogue is awash in conventional wisdom that often doesn’t hold up under scrutiny. To inform better solutions and policy to combat misinformation, society needs a credible fact base that is supported by a robust body of research and led by a diverse network of scholars.

Knight’s $50 million investment in the technology and democracy space has now led to the establishment of new research centers at five top research universities around the country, and scholarship is being accelerated and scaled at numerous other institutions of higher learning, independent research organizations and policy think tanks.

Though relatively new, these grants are already showing early signs of promise. Scholars in the Knight Research Network are seizing these unprecedented times by publishing volumes of new scholarship and injecting data and insights into the public discourse at this critical moment. Examples include:

A second precept of Knight’s investments in this space comes from recognition that trusted journalism is crucial to this effort. Knight’s journalism program believes the best strategy is to position journalists to develop resilience against mis- and disinformation as if they were a chronic illness.

We’ve asked ourselves: how can we connect journalists with experts who can provide the necessary training, tools and other resources, so that journalists can adapt to this increased threat and manage this scourge to our democracy?

To that end, Knight has committed more than $3 million to universities and other organizations to help journalists develop resilience through knowledge, tools and skills. Key projects include:

Misinformation and disinformation are going to be around long after the presidential election, and they will continue to undermine our democracy. Communities of color and non-English speakers will be impacted the most. Misinformation makes it difficult for them to deal with a deadly virus and causes them to question whether their votes will be counted. Knight’s investments are important because they help mitigate those challenges today — and to anticipate ones to come. And we will continue seeking opportunities to partner with scholars, researchers and journalists, and to resource efforts to counter these threats and ensure that all communities across America can be informed and engaged. 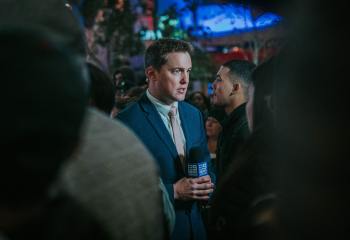 August 4, 2020
Gallup/Knight Poll: Americans’ concerns about media bias deepen, even as they see it as vital for democracy

October 21, 2020
Americans are critical of technology companies despite changes to misinformation policies